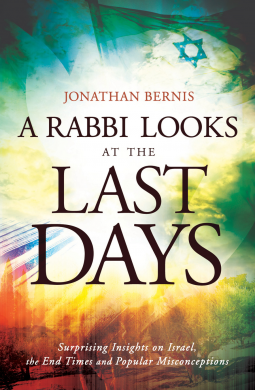 He’s not exactly a traditional Rabbi, per se, as he is a Messianic Jew.

That said, however, it has been very interesting to read his insights on just on the last days, but where we currently stand and how close we are to the end. In that capacity, Bernis opens the book with his list of personal qualifications: Jew by birth, raised a Jew, discovered the Messiah, launched a Messianic congregation, became a missionary to the Jews in Russia, etc. His experience is, to me, par none in the field of understanding Messianic Judaism and the barriers between Jews and Christians.

What he has to say about the end times causes me to commit to a face slap. The fact that the Bible so clearly illustrates the principles he points out, but my failure to recognize it, is appalling. However, I gathered much more from his discussion of living as a Messianic Jew and witnessing to Jews. He points out that the Messianic lifestyle is not wrong, which is something that I have unfortunately been told by many-a-Christian, even those with the best of intentions. Bernis’ writing not only shows me that it’s good for me to embrace my ethnic identity, but also a mitzvah.

I recommend this book to everyone, without reservation. For the Jews, Bernis reveals how Y’shua doesn’t involve conversion or abandoning your identity. He shows how Y’shua is the Jewish Messiah (HaMashiach), and coming to faith in the Messiah does not requisite abandoning the Jewish life, but rather enhancing it. For the Messianic Jews, Bernis reveals the prophecies in the Bible that point to them being on the correct path. And for the Gentile Christians, Bernis illuminates the two thousand year history of abuse of Jews at the hands of so-called Christians, and how that prevents the message from being heard.

Remember, Paul said that he is a Jew to the Jews, and the Gospel to be shared to the Jews first (Romans 1:16). Be sure to check out Bernis’ ministry efforts at jewishvoice.org. I know I will…