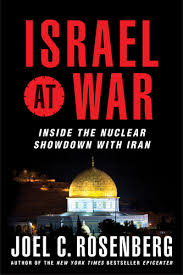 Joel Rosenberg isn’t just a fiction writer: he is a man closely connected to the higher-ups in Israel and has worked with them for many years.

Rosenberg brings forth this new book, a nonfiction collection of the news regarding Israel’s war with Iran, with excellent timing. Following Rosenberg’s style of writing, this book is easy to read and motivating, but unfortunately the topical arrangement of the material causes jumping back and forth in the timeline, which I found slightly confusing.

Before reading this book, I was surprised. Personally, I was not aware of a war coming up for Israel. My traditional American ignorance overruled my Jewish heritage, and the result was me being clueless. Further, what the American Presidential Administration has said on the matter is nothing compared to the news Rosenberg took and news articles he collected. The truth is that Israel has been at war with Iran, who views Israel as the “Little Satan” and America as the “Big Satan.” So why, then, does Obama and Associates believe that we can make peace with a nation that believes we need to be obliterated?

Rosenberg is a New York Times best-seller, and for good reason. His ability to articulate the real issue (not from the American standpoint, but an Israeli one) is enlightening and breathtaking. We very well could be going to war soon, and that’s a frightening concept to consider.

I review a lot of books. Check out my State of the Blog stats for the details, but suffice to say, “a lot” is a good descriptive term in this case. Completing so many reviews means that I can’t read or listen to the entirely of every title I review. Mostly, I consume enough of the title to get a good picture of the author’s voice and ability, and review based off that, but I typically don’t read the entire review. This is actually a benefit to ensure I don’t give out spoilers and such, but I digress.

This book is captivating – there is no way around that. Rosenberg’s ability to articulate and present the material in a shorter book format has kept my interest to complete the title entirely, marking it as one of the few I deem worth reading to everyone. I give this book high marks, all around, and exhort both Jewish and Christian believers to read this book. The future of this nation, and Israel, is at stake.

I…exhort both Jewish and Christian believers to read this book.

Rosenberg’s book is just the beginning of my knowledge, but not the beginning of the war. There’s much to come, and in the near future. Don’t miss out on the covert details of Israel  at War, and find out how America really hasn’t helped the most important nation overseas like we thought they have…Disclosure: I have received a reviewer copy and/or payment in exchange for an honest review of the product mentioned in this post.