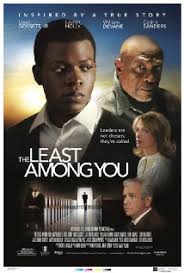 Traditionally, I have done book reviews for Thomas Nelson / Booksneeze, but recently, the opportunity to review a DVD product came up. “The Least Among You” is based on a true story following the 1965 Watts riot. Following the accounts of Richard Kelly, serving probation at an all-white seminary, we follow Kelly through his trials and tribulations at an institution that shows the foundations of postmodern beliefs. Kelly forges through the difficulties with the mentoring help of the school’s gardener.
Due to a hack of the original Infinit Love Ministries website late 2010, the original review was lost. Please refer to Amazon.com for a current recommendation or enjoy the addition below…
In all, this film is very much like the earlier onslaught of Christian films – a poorer quality and documentary feel to it. While the actors did their best to portray the characters, the cinematography of the film made it to the “no” list for me – a movie I had no interest in keeping. I gave it three stars. If not for the cast, it could have easily been a two star film instead. History buffs and church fanatics may love the film, being inspired by a true story, but it’s not one for the movie library.