There must be something about the Lawhead family, releasing book after book in the Christian fiction genre. While Stephen’s writing is overly complex and difficult for the average reader, Ross manages to hit the nail just right in his new fantasy Ancient Earth series.

Stephen Lawhead writes “The Bone House,” the second edition in the Skin Map series. Kit Livingstone finds himself in a race against time and parallel universes, as he seeks out the map his distant relative Cosimo instructed him about. Facing opposition by a deadly and evil enemy, Kit’s adventure could very well determine the future for every universe.

Charlie West returns in the Homelanders series. In prison and facing death around every corner, Charlie finds himself wishing that the events that have passed since that fateful night he went to sleep as a kid and woke up wanted by the police never came. Missing family and friends, he knows that the Homelanders are there, in prison, with him, waiting to strike at any moment. Then it happens. Charlie has another vision – of a plot set to cause mass destruction. How can he intervene in time, trapped behind bars?

Andrew Klavan writes with excellence, spinning a tale that captures the most critical of readers. Regardless of age, this novel presents the ultimate chance for the thrill, featuring the protagonist as a Christian, managing to keep his faith despite hard times. As the cover suggests, this book is about action as well, providing a character development that allows readers to identify with Charlie within the first page of reading.

Klavan pulls off suspenseful action well, maintaining a thrilling experience that will bring readers to the edge of their seats. It is also great for those that desire to keep faithful to G-d yet crave a piece of action – showing that with G-d, all things are possible (Matthew 19:26). Enjoyable from beginning to end, this book has it all. 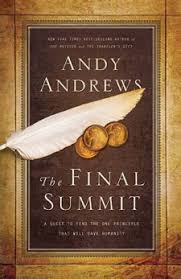 Andrews writes the sequel to the popular fictional tale of David Ponder (The Traveler’s Gift), from where David learned the seven decisions. In this adventure, we journey with David to the Final Summit – where humanity’s survival is dependent on a council of Travelers attempting to answer the ultimate question – what must humanity do, individually and collectively, to restore itself to the pathway toward a successful civilization. Bringing characters from the first tale to help in this quest, along with new faces, Andrews again presents business practices and perspectives in the concept of everyday living, with the concept of success hinged on our existence.

Andrews manages to write enjoyable fiction, even if he gets unnecessarily lost in the descriptive details. The entire book, however, was quite predictable. Andrews incidentally foreshadowed each step to come, using classic literary errors. Only one twist appeared, of which there is gratitude for that twist itself. Overall, this book is not suspenseful, and in many ways, not entertaining. The overall plot was quite dramatic, basing destruction of humanity off business perspectives, and self-effort, instead of faith. For being a heavenly scene, there is quite a lot incorrect theologically. Understanding creative license comes with fiction, Andrews nevertheless overperformed in being theologically incorrect, portraying G-d as more destructive than loving, impatient (as well as Gabriel), and determining whether humanity should survive or not based off their own efforts. The message, “do something,” is not enough. It never will be. Andrews fell below the mark on this book, and displayed concerns over potential belief in false doctrines.

Overall, this book should not be read. The mass population of readers and moviegoers tend to believe what they read or see, especially when fact is blended with fiction. Andrews’ blending of major fiction with true characters (and their lives) sets many up to believe false doctrines, much like what The Shack unfortunately accomplished. While this may seem harmless, Jehovah Witnesses and Mormons do the same thing – 90% truth with 10% lies results in belief in the lies. This book, while fair fiction, is a one-star rating and deserving of the discard section.

Gerd presents an excellent fictional representation of what it is to be a Jew during the time of Y’shua. I really don’t want to give anything away, but this is a worthy fictional, yet fact-filled, read. Immerse yourself in the land of biblical Israel and see the issues at hand during Y’shua’s ministry, to more fully understand the social-economic implications of His revolutionary messages. Be sure to read the after notes as well, so you can see the intensive amount of research involved in this process.