Be Intolerant, by Ryan Dobson, is an excellent read for anyone who questions what moral relativism is, or the like. Ryan walks us through the reality that we cannot claim to have a Christian walk with shades of gray, and that morality cannot be defined apart from Christ. I could not help but jot down notes as I read through this book. This book is a must for any Christian, and should be part of every Christianity 101 or DMD program out there. I will be adding it to my DMD program required readings list as I being to formulate what the program looks like on paper.

In essence, Moral Relativism just flat doesn’t work. In reality, it is an option to talk about anything except Y’shua. Ryan states it great, “Moral relativism doesn’t follow its own rules, the rules it judges everyone else by. We’re tolerant of all – except you, you and you. There is no standard of right and wrong – except for when you violate what we say is right. You can follow any religion you please – as long as it’s on our list of accepted ones. We love to hear alternative voices – but if you try to talk to us about Jesus, we will silence you. We’re totally in favor of `anything-goes’ morality – unless you use that freedom with my girlfriend, or cut me off in traffic, or steal from my. It’s not just hypocritical, it’s fundamentally broken.”

Many education settings try to adopt foolish and broken concepts of inclusivity, diversity, and similar words that translate to “broken garbage that Satan throws out there because we are like the dog that returns to our own vomit.” Central Oregon Community College does the same in many aspects. Every religion – except the faith of Christianity – is accepted. There is just something about that, isn’t there? The fact that Christ is real and others aren’t, perhaps? And in the end, it’s about heaven or hell…no gray in between.

And then there is the issue of Christians that cling so closely to their sin…and refuse to give it up. Smoking, for example, is sin. Alcohol, as well (more specifically, drunkenness).

Ryan addresses all of this, and more. Even video games. And you know – he’s dead on. Anyone that disagrees with what is presented in this book obviously disagrees with the Bible, since that is pretty much what he is repeating here.

He breaks it down into three options for us…

1) comply with what the Bible says

2) do what you want but suffer the consequences

In reality, only option #1 gets you to heaven…the others go to hell.

I could go on and on and share more, but in truth, get this book and read it. In the end, I hope you’ll agree with Ryan (I do), that “Moral Relativism is sin in a toga.”

If not, then there are deeper issues, such as your salvation, at hand… Kaiser presents the argument that the Old Testament is crucial to a full understanding of the New Testament. The concept of the Old Testament no longer being treated as a historical document, but rather a story book, is appalling. Kaiser points out that under the American judicial system, we have the code of “innocent until proven guilty.” In scientific evidence, we start with a hypothesis and test it to determine if it is false. If it passes the test (not false), then we can certify it as Law, or Truth. Where does this fit with our regard toward the scriptures? There have been no examinations as to the veracity of this historical document, but rather a condemnation simply because of the implication that we are held responsible to a Creator. “In an indictment of this so-called objectivity, the judgment of history has caught up with that bit of Enlightenment hubris and has exposed such claimants to objectivity as a plurality of subjective relativizers. And the rest, as they say, is now history>” (28).

The implications of regarding the Old Testament as no longer relevant, no longer reliable, are huge. Without the Old Covenant, we have no purpose for the New Covenant. And thus, we have a church born not out of sacrifice and repentance, but out of freedom and selfishness. We no longer have a church that seeks the Creator, but rather one that become their own creator, and in doing so, commits idolatry. But, after all, the Torah holds no ground, and thus, the Emergent Church can continue their sugared cereal breakfast, lacking all life-sustaining nutrients and health. In the end, they will hunger more.

In essence, What Difference Do It Make is a retelling of the first text, with expansions and additions of “stories of hope and healing.” I don’t want to give too much away, but this guides us through the lives and pain of Ron and Denver, seeing part of their original text, with much more information added in, after the fact, that helps complete the story. Overall, this book is, more than anything else, about hope.

This book was quite a challenge to accept in many ways. Before I started reading this book, I had a discussion with some men I am discipling. We were talking about our concerns helping the homeless because they may use what we give them for sin addictions. After reading this book, I cannot say the same. Y’shua said that we are to give of anyone who begs, and for those who would ask a coat, give them also our tunic. I have learned that we need to give to the least of these, as if entertaining angels. Secondly, it isn’t helping them. It is blessing them. To help them would get them out of there entirely, but requires us to get quite dirty on our own end as well.That, and the fact that if the church stepped up and did what they have been called to do, there would be no homeless situation.

Biblically-based, rooted in scripture, and of sound foundations, I support this book for those either looking for a hopeful tale or need a serious wake-up call about how we are to help the homeless. 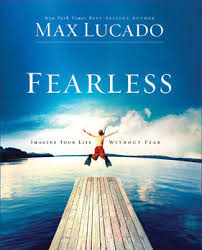 This book is simply about what the title suggests: living a life without fear.

“The Noticer,” by Andy Andrews, is a simple fictional story about a man named Jones. Not Mr. Jones, just Jones. He calls himself a Noticer, someone gifted in noticing things in life – very much so from a different perspective than those in the situation. He travels through several individual’s lives during the book, narrated by the first person mentioned in the story. While we never get to see Jones’ perspective at every situation, or truly discover who he is, there are suggestions that lead you to a story similar to the Holy Bible…

Excellently written, this story includes a “group study” section in the back for use in small groups. That being said, this is a great read that is simple to understand and brief, while allowing a deeper understanding for those looking behind the scenes. Overall plot, characters, scenery, etc., permitted me to visualize the story taking place, as if I were a participant. Not many books give me the perspective of the narrator, however, at times this one did.

Overall, the message was inspiring and excellent. Andy writes this book as if it was him at an earlier age, and at some points I wonder if it is fiction at all…in fact, with the resources provided for Thomas Nelson Book Review Bloggers, there was the statement, “based on a remarkable true story.” This is something I would love to investigate more in the future.

Written in a manner that contains the Gospel, without direct references to the Gospel, this book also allows perspective for those not connected in the church or Christianity – even with the provision of the Love Languages Gary Chapman presents, yet in a simpler, easier to apply, format.

I give this book the green light for people to read, and I have been recommending this book to several individuals. The idea that I started reading on my Kindle, and found myself having difficulty putting it down…that is a very good thing.